I saw Steve Aoki at Club Syndrome . No, that was the night before last night, actually. Last night I downloaded the Chinese dating app “Tantan” and spent HOURS of my life compulsively swiping left on pictures of men in the drivers seat of Audis. Then this morning I was abruptly awoken by the racket of some very entitled construction workers in the apartment above me removing flooring. I’ve watched enough HGTV to name that sound with a degree of authority. I had an angry meditation in the prone position in my bed for about an hour with that as music. The people who moved into that apartment about two weeks ago are usually screaming at each other until they loudly sob and throwing things so I guess I can be grateful about the sound of construction. Maybe they’ll insulate. 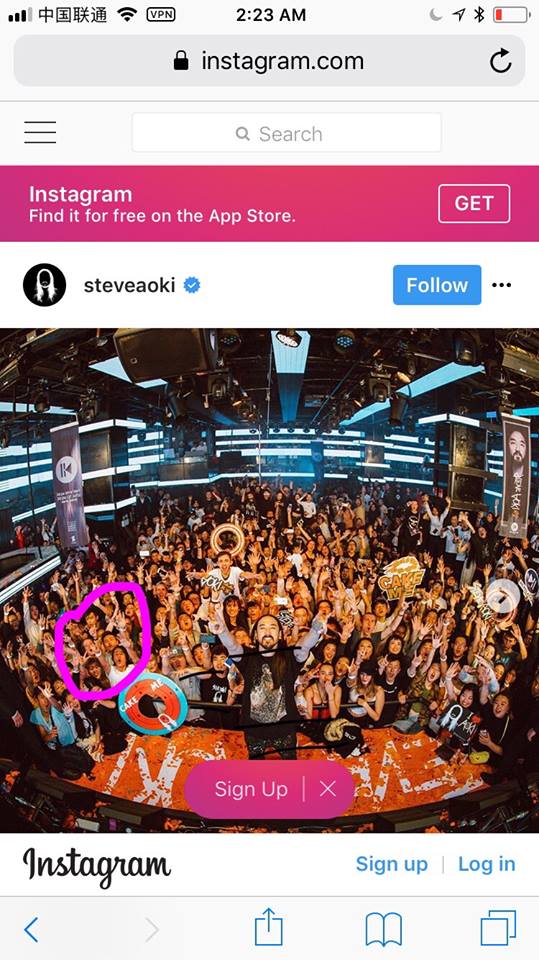 That’s me with my arms out really wide at the show. I got a bit of Steve’s cake on my face and my friend Kassie back home says that means I’m famous now so that’s cool.

I’m at Sal’s Restaurant caffeinating and shoveling Tex Mex flavored calories into my fat mouth. My feet are cold and I’m regretting my conscious decision earlier to not wear socks. Steve Aoki was lit as fuck but to be honest my body regrets it. Everything hurts. Especially my neck. It doesn’t help that Sunday I wrecked my e-bike because I was tired and someone braked really hard in from of me. It wasn’t severe or anything but I’m definitely inflamed. I spent about six hours of Monday jumping and fist pumping and swinging my long sweaty hair around. There are no drugs in China so this wasn’t fueled by anything other than joy and adrenaline. Not that I’m into drugs, I just wanted to clarify. It was a real rave despite the lack of illicit substances. I wasn’t planning on going to this event as I didn’t know about it. I was just at Barfly guzzling my obligatory “freakin weekend” pint of porter when I saw some VERY well dressed people walk in and heard the news of this show.

I transferred 288 RMB to a stranger on Wechat who promised me a ticket, hopped on my e-bike, forgoing the helmet in my excitement even though it was only slightly over 24 hours since my sleepy mishap with the brakes, dropped my teacher trousers at the door of my apartment in favor of some tights with an interesting pattern and a very short, very flattering dress and arrived at the club about an hour and a half before Steve Aoki came on. I brought the party in my pocket and began dancing the MOMENT I walked in.

I got the opportunity to exercise my boundaries with two different men who mistook my clothing and good vibes as invitations to touch my body in ways that made me feel uncomfortable. One was super creepy and one was actually pretty cool, I just didn’t feel like being touched. This has been an issue at the forefront of my mind lately, the whole people touching me when I don’t want to be touched thing. My friend suggested that I simply assert myself by saying “Don’t touch me.” Great suggestion, friend. It worked. It turns out that most people respond immediately and rather respectfully to clear instructions. I’m not mad at the two people and I wasn’t inappropriately touched by them after I clearly stated my boundaries. New skills being learned at the ripe age of 26. No need to silently seethe when we can use our words.

I met some VERY cool and seemingly VERY wealthy Chinese teenagers there who I didn’t realize were teenagers until they asked me how old I was when I was in the front seat of their Audi on my way home at 4am. When they told me they were 19, I didn’t actually believe them at first, but alas, it was true. I told them to call me “Nai nai” which means grandma in Chinese and we’ll probably hang out in Dali when I visit in a few weeks.

Besides swiping left compulsively into the wee hours of the morning, I also had dinner with my friend Alexis at my Chinese teacher’s home yesterday. She lives with her parents in a beautiful home in a beautiful neighborhood. Her parents were very hospitable. The meal was quite delicious. Her mother is a very proficient chef who studied by watching cooking shows. We were stuffed like the many dumplings we consumed upon our departure. 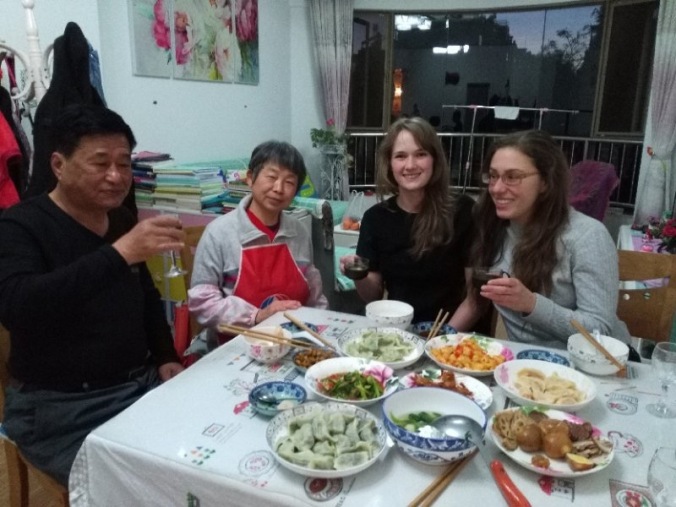 We all agreed that we were this lovely woman’s new daughters and she will be instructing me in the ways of the Chinese kitchen at a date to be determined. That means my Chinese teacher is my sister, which I’m down with. She’s a wonderfully talented and kind woman, pictured below between friend Alexis and I. This is a tower on top of a mountain that we climbed up to for a beauteous view of the setting sun over Kunming. That’s Alexis on the left there. Olive in the middle, and me on the right. My body was sore but it was worth the climb for the view. 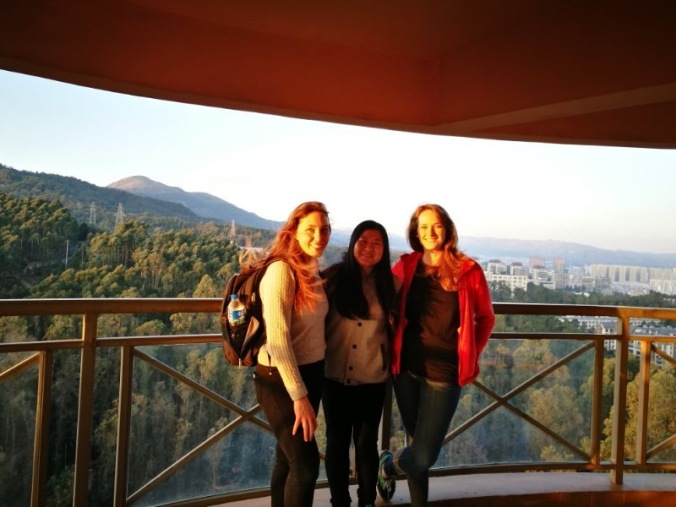 I decided to write all this down because I don’t know why. I haven’t touched this blog since a nice man gave me $50 on Paypal to post a link to his apostille website. I hope he’s well and I hope you enjoyed my rambling. Usually my life here is less haphazard and more deliberate. I just wanted you to know that in case you were worried about the no helmet thing. Love to you and yours whoever you are.